A year after the catastrophic explosion and fire at the Icepak coolstore at Tamahere and while still recovering from his injuries, fireman Merv Neil has grabbed the chance to burn up the race track.

Neil did a high speed lap with V8 driver, Greg Murphy, at the Taupo raceway.


The circuit was recommended by his nurse, as part of his recovery, reports TV3.

Neill was badly injured by the explosion last year, and was in a coma for three months.

At Taupo, he was a little nervous about setting the track on fire.

Afterwards, Murphy joked that Neil “screamed like a girl. We didn’t expect that from a big fella.”

Merv has still got six more months of recovery and rehabilitation. He has put the challenge out to Murphy – to put his driving skills to the test in a fire engine. 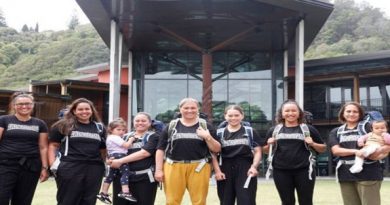