The pressure cooker atmosphere of a television food show hasn’t put Tamahere’s Phillip Maultsaid off the business, with the former Masterchef NZ contender this week starting his culinary training.

Mr Maultsaid, a father of two and former salesman, was one of the participants in the new TVNZ series, and while he was eliminated from the show in the second episode he still thrived on the experience.

More than 1000 people applied to take part in the show, which is based on the popular series in Australia, Great Britain and the United States, reported the Waikato Times.

Auditions for 500 of those entrants were held in Auckland, Wellington and Christchurch.

The 500 were then whittled down to 60, who headed to Auckland for a full cooking audition (which formed the basis of the first episode in the series), before 24 participants made the cut for the rest of the series.

That 24 was then cut down to 12 finalists in the second episode, which screened this week.

“Since I was knee-high to a grasshopper, I’ve always been cooking or doing something in the kitchen,” Mr Maultsaid explained. “It’s been one of those things I’ve carried on through.”

Cooking has always been a passion for Mr Maultsaid, who this week started as a first-year catering student at Wintec and hopes to one day open his own restaurant.

Mr Maultsaid has a background in the food business, having been brought up on a Hawke’s Bay orchard and worked as a salesman for Delmaine Foods. He was prompted to enter the show by his wife Janine.

While he didn’t consider himself to be a “TV person”, he soon understood the “fantastic experience” on offer through the programme. Filming took place over several weeks late last year, and while a fan of TV cooking shows, he never anticipated being part of a food programme himself.

“It just came along at the right time, really: I’d just decided this (cooking) was what I wanted to do for a new career, so it was perfect and fitted into place really well.”

Filming the show involved long days in front of a TV production team – up to 17 hours in some instances – and Mr Maultsaid said it was one of the greatest challenges of the show.

“In the cooking industry there’s a lot of pressure, but at a different level again with the cameras and trying to work out what they want,” he said.

He did extensive “homework” for his specialist lamb and kumara dish, and investigated the background and tastes of the judges to be as prepared as he could be to impress them.

“My main goal was to get the experience and soak up the knowledge,” he said.

An early exit from the show hasn’t dimmed Mr Maultsaid’s enthusiasm for cooking.

“Food’s a whole experience for the family, but for me it’s buying the produce, cooking it and presenting it, and getting the feedback from family and friends. 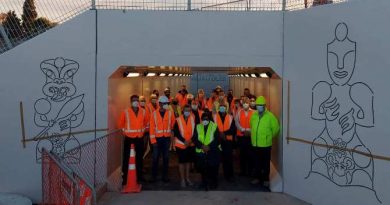 One thought on “Tamahere TV chef off to school”