The Waikato Times today apologised for inaccuracies in an August 20 story on a summary judgment application by Brian Liddell against Waikato Coolstorage, formerly Icepak Coolstores.

The story was also run here on Tamahere Forum, which has been updated with the apology. The Waikato Times’ apology to Brian Liddell also runs below.

On August 20, 2010 we published a court report of the summary judgment application by Brian Liddell against Waikato Coolstorage, which arose out of the explosion at the Icepak Coolstores’ Tamahere facility. In that report we incorrectly described Mr Liddell as a hazardous goods inspector when in fact he is an electrical inspector. We also reported that the purpose of the summary judgment hearing was to determine whether Mr Liddell should be charged in relation to the explosion. This was incorrect. There was no suggestion that Mr Liddell could or should be charged in relation to the explosion and we apologise to Mr Liddell for any distress or embarrassment caused. Mr Liddell was seeking summary judgment against Icepak because he believes none of Icepak’s allegations against him can succeed. Mr Liddell believes that there was no connection between any inspection work that he did at the coolstore and the coolstore explosion, so he was in no way responsible for the explosion. 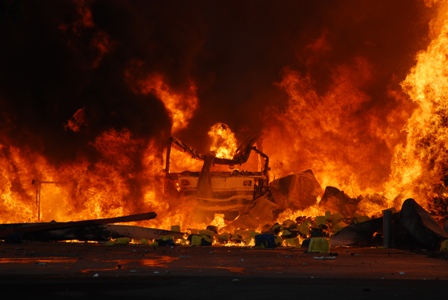