Fifteen Hamilton firemen, including two involved in the Icepak Coolstores tragedy, are sacrificing their upper lips for the Movember mean’s health fundraiser.


Led by Adrian Brown and including Cameron Grylls, both injured at the 2008 Tamahere fire, the Red Watch Mo Bros are growing moustaches for the month to support the Movember Fundation, which raises funds and awareness for men’s health.

To donate to the Red Watch Mo Bros click here. The team is also seeking sponsorship.

Brown told the Waikato Times he got the group together because several studies had shown a link between their occupation and getting cancer.

But, he said, many of his team-mates were doing it for their own personal reasons.

“There is one guy whose father-in-law got prostate cancer and another guy whose mate died of suicide so they signed up because the issues were close to their hearts.”

November is also Prostate Cancer Awareness month and Movember is all about raising money for charities which deal with men’s health issues.

This year the money raised will go to the Cancer Society and the Mental Health Foundation of New Zealand. The funds will then be used to finance education programmes, research and awareness initiatives.

The Red Watch Mo Bros will host a “shave-off” at Hamilton Fire Station at the end of the month with prizes for the best moustache.

Five years on from Icepak fire 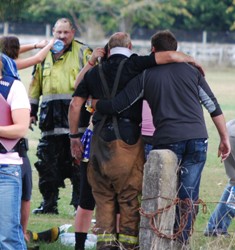