If you have fond memories of the old Tamahere Memorial Hall and would like to relive them now’s your chance.


The around 90-year-old hall in Devine Rd, scene of many a school-age triumph and host to many significant birthday and other social celebrations, is for sale.

So keen is the Waikato District Council to quit the hall after a deal fell through that at a water and facilities committee meeting in early December it was decided to list it on Trade Me.

The council, which faces an around $10,000 demolition bill if the hall doesn’t find a buyer, has not yet listed the hall for sale in the online bargain bin, perhaps calculating that potential hall buyers may have more pressing interests over the festive season.

The Waikato Times reported in December that the hall sits on land within the Tamahere School’s boundaries, which is due to be bought by the Education Ministry for the school. But a law forbids the Crown buying land with an existing building; so the hall has to go.

Anyone with a keen eye for a bargain or who wants a hall-size piece of nostalgia can call council facilities manager Bruce Airey on (07) 824 5704. 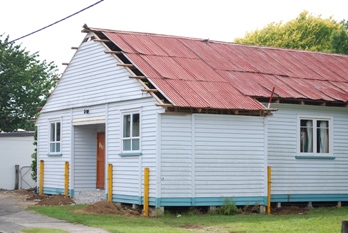 Historic hall on the move

Memorial hall to pass away

One thought on “Hall for sale at bargain price”