Olympic gold medalist Rob Waddell of Tamahere, chairman of the Home of Cycling Trust, will debate the economic benefits of sport at a public lecture at Waikato University on Wednesday.

Waddell, along with Sarah Nathan from the FUEL and Hamilton Gardens Arts Festivals and Wayne Walford from the Waikato Chamber of Commerce, will debate ‘Sport or Spectacle?’ and which is best for Hamilton’s economy.

The fifth and final of the annual Waikato University Winter Lecture Series debates takes place on Wednesday (August 31) from 6pm to 7pm at the Gallagher Academy of Performing Arts. It is free and open to the public and parking is available in Gate 2B off Knighton Rd, Hamilton.

Based around all facets of sport, the free Winter Lecture Series aims to debate the role sport plays in the life of the community, the issues facing professional sport and the role business can play to keep Waikato a key sporting destination. ‘Referee’ Associate Professor Stuart Locke will control the discussion.

Rob Waddell is currently leading the campaign for the controversial National Cycling Centre or velodrome at St Peter’s School near Cambridge.

The Waikato Regional Council is to conduct hearings on the proposal at its Hamilton East offices next week on September 6 and 7.

In an extraordinary meeting on Wednesday, September 14 the council will make a final decision on whether or not to make a contribution to the velodrome. In making its decision, the council will consider feedback from the public and additional research, including an independent economic impact assessment.

Tamahere man on a mission 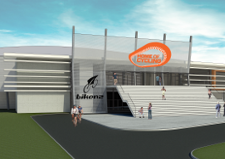