Tamahere’s 90-year-old hall is on the move.


Members of the Taupiri Marae have been preparing the hall to shift to Taupiri all week after they acquired the one-time war memorial hall for just $1.

The Waikato District Council had previously tried to sell the hall, including listing it on Trade Me but got no takers.

The land occupied by the building, which is within Tamahere School’s boundaries, is to be sold to the Education Ministry.

At Taupiri Marae the hall will be reconfigured with the former front entrance and toilet section attached to the back of the hall. It will be used for meetings.

Education Ministry general manager property Kim Shannon told the Waikato Times the ministry was purchasing the land the hall was sitting on, but the building was not up to ministry standards.

Joe Barton, one of the Taupiri Marae team preparing to move the building, joked that they offered 25c, but in the end decided they could stretch their offer to $1.

Taupiri Marae chairman Boxer George said the ticket price was just a tiny part of the total cost of moving and renovating the building, which was destined to be the marae’s new wharenui. The total cost of the project was estimated at $278,000. 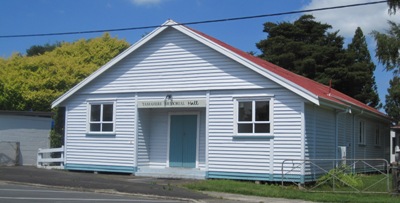 Hall for sale at bargain price

Memorial hall to pass away

One thought on “Historic hall on the move”