She stayed calm and collected through 16 weeks of culinary challenges – and several near misses – but Chelsea Winter finally broke down when she was announced the winner of Masterchef 2012, reported the Stuff website.

The 27-year-old who grew up in Tamahere and now lives in Auckland beat out Waiheke Island mother-of-three Ana Schwarz in the two-hour final episode.

She had been a dark horse in the competition, which she took pleasure in reminding the judges.

“I’ve proved a few people wrong. Josh [Emmett] gave me a ‘no’ at auditions,” she said.

Winter had come close to elimination several times, but the judges stood by her despite a bloody misadventure and allegations of cheating.

And although she admitted to being “terrified” on the day of the final, it didn’t show.

She had a weak start with the first challenge, when she and Schwarz had to taste a curry made by judge Ray McVinne and name as many ingredients as they could.

“The taste test was awkward – I was so nervous and my mouth was so dry I could hardly taste the ingredients,” she said.

She mistook the lamb and goat in the curry for beef and insulted McVinnie by daring to suggest he would use curry powder instead of making it from scratch.

But she came into her own in the next challenge, serving up peppered carpaccio of venison and a venison fillet with caramelised plums and jus, which McVinnie called “near-perfect”.

The judges raved over her presentation – a triumph for Winter, who had previously been admonished for her sloppy plating.

The third challenge wasn’t quite as successful – Winter’s version of Rick Stein’s prawn laksa wasn’t as balanced as Schwarz’s – but she still went into the final round with a one-point lead.

It has become a Masterchef tradition that the contestants’ final challenge is an over-the-top dessert.

This year it was a 10-layer trifle created by Euro chef Eugene Hamilton, which they were given three hours to replicate.

“Here it is, the torturous trifle. It looks like it’s going to torture us,” Winter quipped.

Both chefs ran into trouble. First Schwarz failed to chop her walnuts, then misplaced one of her key ingredients.

Winter macerated her fruit salad too early and was left frantically rinsing liqueur off it, and her top layer of meringue slumped.

“Perhaps looks aren’t everything,” she reasoned as she delivered the slightly lacklustre dessert to the judges’ table.

And it seemed they agreed, as they lavished her with points and announced her the Masterchef winner.

Then and only then did Winter let her emotions show, breaking down in tears. She recovered enough to give a gracious thank you speech, and enjoy a reunion with her boyfriend.

Back home, Winter is enjoying the respite from Masterchef’s high-pressure atmosphere.

“I maybe got a little better with my time management,” she said. “But I still like to take my time. [Cooking is] a relaxing thing for me.”

She’s had to keep her victory secret for eight months, even staying at her job as a marketing executive so as not to raise suspicion.

“Although it has been a bit painful carrying around this big secret, it’s been really cool watching the show,” she said.

She thought the public had faith in her because of her composure, which stood out next to the oft-panicked Schwarz.

“My friends have been saying ‘You never seem to get flustered’.”

Her clearheaded approach will come in handy as she works on her first cookbook, part of her Masterchef prize package along with a car and loads of kitchen supplies.

The book is “simple food well done”, she said.

And the hedonists among us will be relieved to hear that, unlike last year’s winner Nadia Lim, Winter is adamantly not focused on healthy eating.

Tamahere TV chef off to school 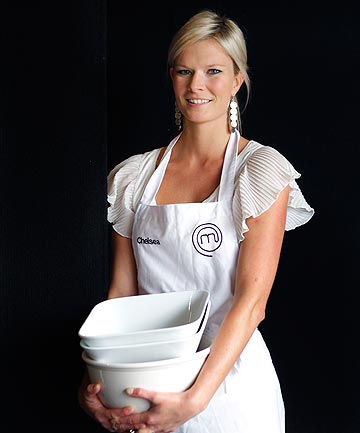