Artist Ciane Lawrey’s exhibition, Origins, at Tamahere’s Inspirit Gallery is partly her reflection of what it means to be Ngati Pakeha.


When Lawrey was about seven, she was playing on the jungle gym with her mates and one of them noticed how white her skin was, she told the Waikato Times‘ Aimee Cronin.

It was something that had never occurred to her before, she told the Times. She looked down on her pale wee arm and turned it over to find the underneath was paler still.

Lawrey thrust her arm, like a cricket bat, out in the playground that day and told her mates to put their arms next to hers. There was a mix of brown and white.

And all of a sudden she was Pakeha and they were Maori.

Decades later, the 42-year-old sits in a cafe and describes that moment clear as a bell. She offers her still tiny white arm and laughs at the day she made the discovery that has been a starting point for her first solo exhibition.

After taking part in several group shows, Lawrey decided she had too much to say and went out on her own.

She has spent the past year creating work for the exhibition that she says reflects on a lifetime of experience and acquired skill; and the idea of being an indigenous Pakeha, that she read about in The History of New Zealand by the late Michael King.

She’s a fiery woman and is passionately Pakeha. “I get really offended when people call me European. I’m not friggin European. If I went back to Europe, what would they do with me?”

Some of her pieces are based on creating a Pakeha mythology: there are Pakeha and Maori fairies, and she has also explored the history behind how we came to be called Kiwis. When we travel overseas, we all relate to the term. It binds us together and is part of our shared identity.

Lawrey has used the kiwi symbol on vintage bags and wallets, “because you always carry your heart with you”.

A leather bag is dotted with crosses that represent stars from the panels in the Maori meeting house. There are four crosses to represent the Southern Cross: “So your stars will always bring you home.”

There are prints worked into old pieces of furniture: an old hall unit, a drum that has been revamped into a coffee table, accessories and clothing. The old drum’s her favourite. But she’s proud of each piece.

As well as being staunchly Pakeha, Lawrey is also passionate about using recycled materials. It’s a design parameter she has put on herself because she’s mystified by the amount of waste generated by today’s consumer driven society. “Op shops are turning people away. You can’t even give the shit away anymore, because people are just buying [more] stuff.”

She talks about formidable style. Dressing as a form of expression, the slow fashion movement – just like the slow food one.

“It’s all about slowing it down and thinking about things. You’ve got to be the best advertisement for what you want the world to be.”

Lawrey is not sure what’s next after the exhibition. She’s wrapped up in a newly coloured green jacket that’s been a bit of an experiment and she’s going to bling it up with badges. Her hair is dark brown and swept off her face and the tips are hot pink. She’s a stand out. But she likes her work to go under the name of a nom de plume – Ginger – because “ginger is not necessarily a boy or girl, gingers are a bit of the underdog”.

She doesn’t want to limit herself. A while back she noticed it had become fashionable for women to bake.

“I wanted to explore whether we are betraying the sisterhood by going back into the kitchen. Are we really? I made a whole bunch of aprons and I don’t know what the answer is, but everyone bought the aprons, so what’s that about?”

Next up, she warns she may do something completely frivolous. “Maybe pink frilly undies? Who knows?”

Origins will be at Inspirit Studio and Gallery until August 31. 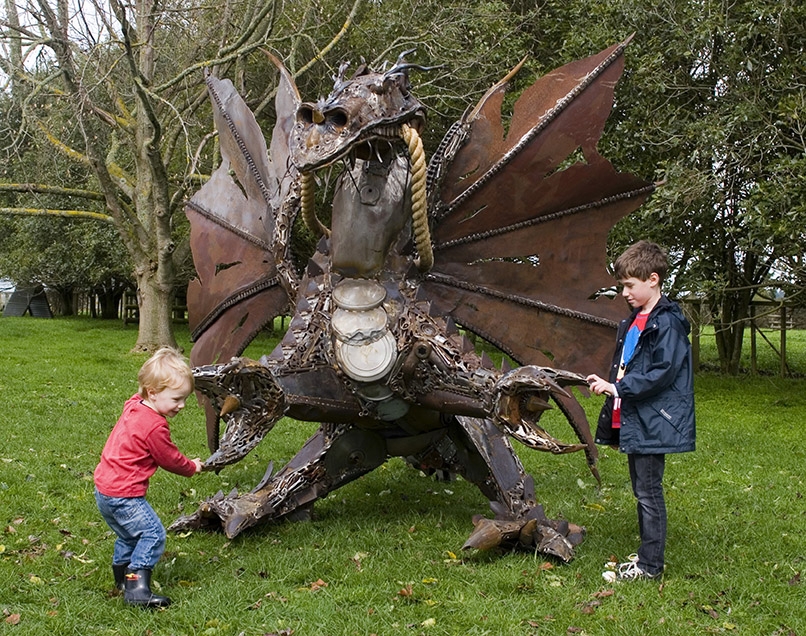 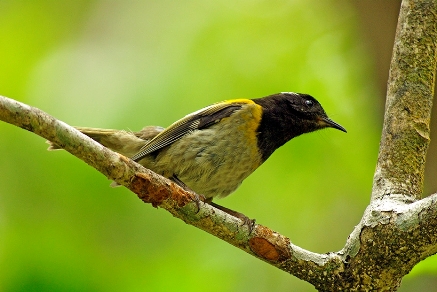 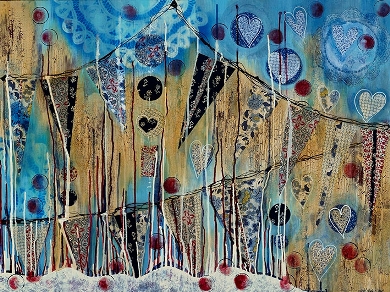