William Newell, after whom Newell Rd is named, was a farmer who contributed significantly to the development of the agricultural industry, records historian Lyn Williams.

Newell’s farming career began in Epsom as a young man newly arrived from County Down, Ireland, where he was born around 1863, Williams writes in her weekly Waikato Times column, ‘The dead tell tales’.

After managing part of the large Woodlands Estate, [which stretched from Gordonton to Eureka], he managed the Bloomfield brothers’ 500-acre [200ha] farm at Tamahere.

He bought 300 acres [121ha] of the farm, which was on either side of what is now Newell Rd and extended to the Waikato River.

A 1904 survey plan shows the property before the road was formed; the farm was bounded by ditches and banks topped with hedges, not fences.

Newell bred Clydesdale horses, sheep and shorthorn cattle. He was in demand as a judge at cattle, horse and sheep shows, was president of the Waikato A&P Association in 1925-26 and a volunteer worker at the summer shows. He was influential in the setting up of sale yards in Hamilton East. He served on the Tamahere School committee for 14 years and was a member of the Waikato County Council from 1911 until his death on October 21, 1934, aged 71. He had two stints as chairman.

Newell’s grandson, Tamahere resident Willie Hodgson, noted in a postscript to this Forum story that a fifth generation of the family still own some of the original Newell farm.

In 1908, Lyn Williams wrote in her column, Newell presented a cup to the Waikato A&P Show for ladies riding in “divided skirts”.

In 1896, Newell’s little daughter, Mary, fell down a deep well on the farm. Newell went in after her, grabbed her clothes in his teeth and brought her up by hauling himself up by the rope. She was only slightly bruised, having narrowly missed hitting her head on the wooden superstructure.

The farm extended to the Narrows bridge, and it was here that tragedy struck the family. On Christmas Day 1918, William and Florence Newell’s son, Robert, drowned in the river. He was being taught to swim by William Devine, a well known footballer, but got into trouble. When Devine tried to rescue him., Robert grabbed him in a stranglehold. After struggling to free himself, Devine was too exhausted to hold on to Robert who was swept away.

Robert is buried in Hamilton East Cemetery along with his parents and one of their daughters, Elizabeth. 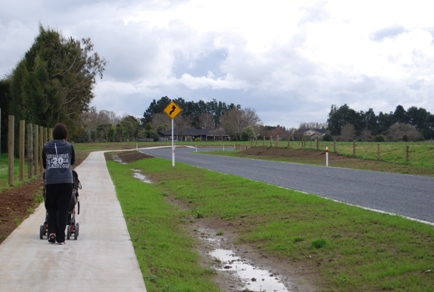