A substantial piece of Tamahere history has been brought to light in a South Island workshop.

In 1923, the Tamahere Roads Board became the proud owners of an Aveling-Porter steam roller and scarifier, shipped from England and transported by rail to the Hamilton railway station.

The new machine, (the roller rolls, the scarifier breaks up the surface of a road) was demonstrated to the proud members of the roads board in front of the Lye family farm in Newstead, and was soon hard at work on Tauwhare Rd.

Two years earlier in 1921, the roads board had embarked on a programme to upgrade its roads by sealing them and had arranged a €33,000 (around $99,000) loan, authorised by a poll of ratepayers, reported the WDC Link.

The board also decided it would need to purchase “modern road machinery” and it was agreed that about €3000 of the loan would be needed for this, to avoid being required to continue hiring the machinery belonging to the Cambridge Roads Board. The result was the brand new, bright and shiny Aveling Porter roller.

In July 1927, the roller was hired to the Waikato County Council and by 1928 the Tamahere Roads Board became part of the county council.

The roller’s history becomes a bit of a blank for a long while but it apparently ended its working life at the end of a country road where it was left to slowly decay.

Fortunately, it was rescued by a steam enthusiast, Brendon Rowe-Mitchell, who transported it to his Christchurch workshop where it has been restored to its former glory. 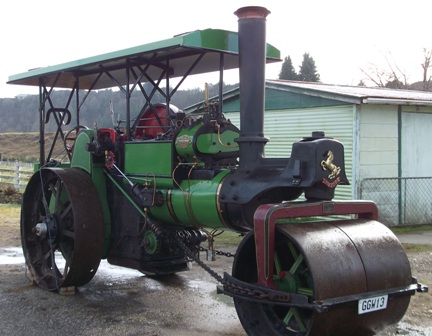