The Waikato Regional Council is moving to contain and eradicate a significant outbreak of one of the world’s worst weeds, discovered on a property close to Tamahere.

Alligator weed can spread rapidly from even the smallest stem fragments, taking over pasture and clogging waterways, and is very difficult to eradicate.

The latest infestation in the Waikato is on a 36ha property near Tamahere and the area’s landowners would do well to be on the look out for the fast growing weed, said a regional council spokesman.

He declined to identify the property as the landowners had requested privacy. Costs of removal – expected to be several thousand dollars over several years – will be met by the council.

Introduced more than a century ago in ship ballast from its native South America, alligator weed is widespread in Northland and has been discovered in Auckland, the Bay of Plenty and other parts of the Waikato.

The council classifies alligator weed as an “eradication” pest, meaning that where it is detected the council will act to remove it immediately given the threat it poses to productive land and native plants, said council biosecurity officer Wendy Mead.

“The weed is spread extensively in patches over the 36-hectare property south of Hamilton and we are getting on to its control promptly,” Mead said.

“We will use a range of herbicides, to be applied by registered spray contractors under our supervision, in an effort to contain and eradicate it as soon as possible.

“It is likely to take some years to completely eradicate given that alligator weed outbreaks are hard to kill off quickly.”

Alligator weed is a low-growing, non-woody perennial. Its leaves are generally arranged in opposite pairs or whorls, spaced at intervals along hollow horizontal stems. Stem and leaf sizes vary greatly. They can be very compact in lawns or grazed pasture, or much larger when growing in water.

The movement of soil and plant matter from the property will be restricted as part of measures to stop the spread of the weed. The property owners, who are fully supportive of the control programme, are co-operating with the council’s control efforts, Mead said.

The presence of alligator weed was discovered recently during a routine inspection by a council pest plant contractor. It is not certain how the alligator weed ended up taking hold on the property. However, it appears likely to have been transported onto the site through contaminated soil.

Mead said the discovery was a reminder for all property owners around the region to be vigilant about the presence of noxious weeds. “It is timely, with the current dry conditions, to remind farmers to check stock food for weeds and be wary of importing feed from unknown sources. We advise farmers to always insist all stock food, sand or soil and machinery that enters their property is weed free.

“We are happy to identify pest plants and give advice on weeds wherever people have concerns,” said Mead.

“It’s important for the sake of our rural economy and environment to keep on top of such pests as alligator weed given their destructive potential.”

If you see this weed on your property, do not cut or treat it. Call 0800 BIOSECURITY (0800 246 732) to report it to your nearest biosecurity pest plant officer.

Click here for more information on alligator weed, how to identify it and what to do if you detect it. 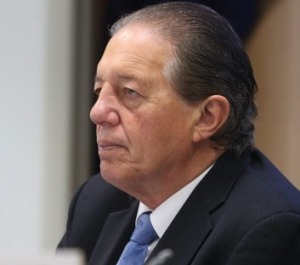