A pyjama-clad Waikato student helped foil a burglary by hiding in her garden and giving police a blow-by-blow account of the incident.

The 19-year-old was studying for exams at home in Tamahere when a car entered the driveway late yesterday morning, Constable Trent Montgomery of the city’s Tactical Safety Team said.

“Thinking the occupants were friends of her parents, the woman didn’t answer the door when the visitors knocked as she wanted to avoid embarrassment about her attire,” reported the NZ Herald.

The young woman was then surprised to hear banging on the windows and a loud noise as a pane of glass was smashed.

“The offender has smashed a window to gain access into the home and proceeded to take the family television, jewellery and other items.

“Grabbing a description and partial registration number of the offender’s car, the woman hid under a pile of clothes and rang 111,” Mr Montgomery said.

Believing the burglar had gone the woman went down stairs and saw the front door ajar and discovered the alleged offender still there.

She then hid in the garden, relaying information to the 111 operator, he said.

Hamilton and Cambridge police arrived and a short time later a 25-year-old man was arrested at his Cambridge home and all stolen items recovered.

“The woman’s cool head made all the difference. Instead of confronting the offender and putting herself at risk she has gone to a place of safety and relayed crucial information to police who are trained and equipped to deal with such situations,” Mr Montgomery said. 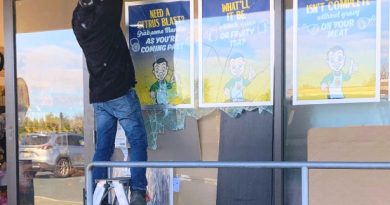