Every year the light-loving jeweller labours away for weeks at 28 Te Awa Lane to turn his Tamahere property into a dreamy and bright wonderland of Santa, reindeer and snow, but this year he’s upped the stakes.

He’s become an official collector of gifts for the Child Cancer Foundation and he encourages people to give a little when they visit, reports Matt Bowen of the Waikato Times.

“If we get a few things in and we make a few children who are in hospital on the day happy, what a great thing, and make the children smile and parents smile,” he says.

“If it gives them a bit of joy with the horrible thing they’re going through then that’s worth, whatever, that’s just absolutely magic. That’s what Christmas is all about, magic.”

Mr Hart started his annual labour of love a week before Labour Weekend and now there’s a quarter of a million light bulbs strung along every roof ridge, door frame and tree trunk.

Last year more than 500 people lapped up the free-of-charge atmosphere some nights and many of them tried to help pay for the electricity bill.

Mr Hart always declined because that’s not what Christmas is about.

Others suggested setting up a donation box for charity, yet he didn’t feel comfortable with that either

Instead he settled on gifts. There are conditions though. Beat up seconds won’t cut it. All presents should be sparkling and new and gift-wrapped.

They also need to be age and gender suitable so each one should be labelled either boy or girl and with the toy’s appropriate age range.

People are welcome to wander in for a look and even spread a picnic blanket on the lawn for an hour or two. There are prickles though so bring shoes.

The gift collection will run through till December 23. Then they’ll be bundled together and handed out to sick children in hospital.

Mr Hart may ask to go along too, just to see the magic on those faces. 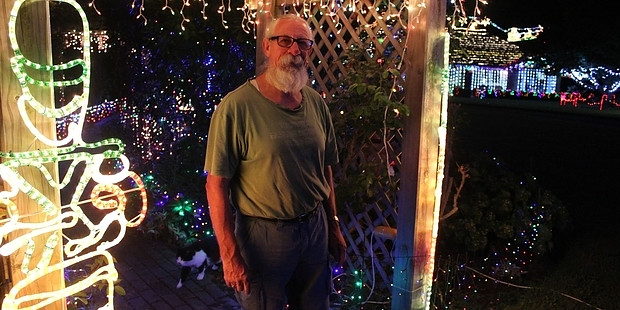 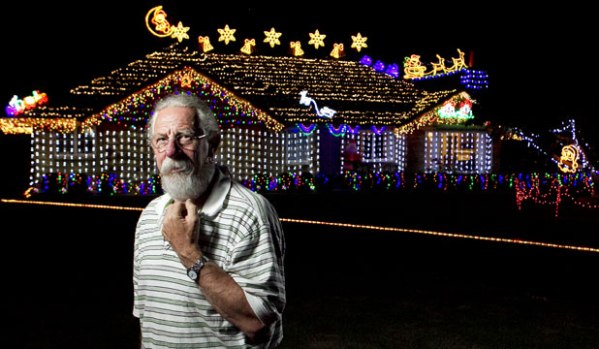 Hart of Christmas lights up again

Gifts from heart to good Hart