The NZ Transport Agency will cut the speed limit on State Highway 1 to 80km/h past the Cherry Lane killer corner.

The SH1 speed reduction, along with the removal of the southbound passing lane, were among safety improvements investigated after widespread calls for action on the corner prompted by concerns at the high number of serious crashes, including a fatal accident in April.

NZTA Principal Safety Engineer Michelle Te Wharau said today that after community consultation it had been decided to go ahead with the most far reaching safety measures.

The first step would be to remove the passing lane from Annebrook Rd, past Cherry Lane to south of Tamahere Eventide. It would be replaced with a flush median, followed initially by a temporary speed reduction to 80km/h from the present 100km/h.

“There are plenty of passing opportunities on SH1 south of Bollard Road, and [we] agree with the community that a reduced speed limit and elimination of a passing lane-merge located where side roads join the state highway will benefit all road users,” Te Wharau said.

The safety improvements will also include the removal of the left slip lane into Cherry Lane but keeping a wide shoulder. As well signs will be put up on Cherry Ln and Bollard Rd advising motorists to turn left into SH1 and use the Airport interchange as a safer route to travel to Hamilton when the highway is busy.

Flyers for Tamahere people to share with family and visitors on how to get to Hamilton if they turn left out of the side roads and use the Airport interchange had been printed and were ready to be distributed, Te Wharau said.

She could not give an exact date for the changes to be completed as the work was currently being programmed and was weather dependent but locals would be notified via media and letter drops once a date had been set. 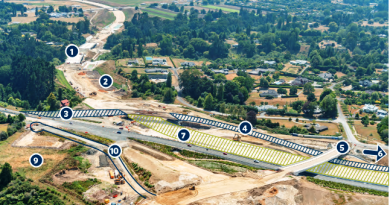 Winter work ahead for delayed expressway