From the language of computers to the word of God, the new Vicar of St Stephen’s Tamahere has taken a modern day path to an old calling.


The Reverend Ellen Bernstein will be welcomed as St Stephen’s Vicar with a service at the church on Thursday, December 11 at 7pm.

“St Stephen’s is a very special parish and I feel extraordinarily blessed to be called to this place,” said Rev Ellen of her seven year journey to her first appointment as a vicar.

She notched up a couple of secular career paths, including working with the computer-based Hyper Text Markup Language (HTML) before deciding on a church career.

“My original trade was writing HTML, a long time ago, when it was written raw and web pages were basic,” Rev Ellen told Tamahere Forum.

On OE with her husband Noel of 17 years in the UK she worked in a facilities management role for a large law firm, and has also worked in various roles in administration.

But in hindsight she can see that her path to ordained ministry was a life-time in the making.

She was born in Cambridge to parents who were devout believers “and I was formed in Anglican traditions through St Andrew’s church in Cambridge, especially as an altar server and bell ringer throughout my childhood.”

In 2004 she started working for the Diocesan office, the administrative centre of all the churches in the Waikato and Taranaki diocese, which takes in a big chunk of the central North Island. She got to know a lot more about the life and work of a priest and her sense of calling really began.

She did a theology degree with Otago University followed by a curacy at St Peter’s Cathedral, Hamilton, with time also in Waikato Diocesan School for Girls and Southwell School, before, most recently, being Chaplain to the Bishop of Waikato.

“It takes a long time to become a priest (the process is designed to take years), so the day of ordination is a big event. Becoming a vicar is another very significant stage; the culmination for me of around seven years of discernment and training.”

One week into her new job at Tamahere, Rev Ellen said she had found St Stephen’s people “engaged and motivated, as the [Tamahere] Market and the [Christmas] Festival demonstrate.”

“I have noticed that everyone knows what they’re doing and gets on with it with great cheerfulness and a sense of fun. For a new Vicar, that’s a rare gift!”

What are her hopes and dreams for her first parish?

“A sensible approach for a new minister is to see what God is already doing and get behind it. For me that means lending my enthusiasm and support to the things that are flourishing, like the market days and the Christmas Festival. The Christian life is not all about Sunday mornings, and most people have a choice of places to be on a weekend, but a Christian community is a worshipping community so part of my focus will be on the 9:30am Sunday service.

“I am really looking forward to meeting Tamahere locals, not just St Stephen’s parishioners, and as often as I can joining the Thursday morning workshops preparing for Festival ‘15!”

“We have this year’s Festival in full swing now,” she said, “the Twilight Market was a phenomenal success and it [the Festival] will go right through to Christmas Eve.

“At 4pm on December 24th we will host Christmas Kids – a family-friendly celebration of Christmas with carols, a crib-story and a craft activity to take home. We will also do candle-light carols at 8:30pm on Christmas Eve, then finally we have the 9:30am service on Christmas Day.

“After that, everyone can relax for a month or so before we start planning the next one!”

Sounds like a hyper busy life for a vicar with hyper experience.

Tots bop to the beat 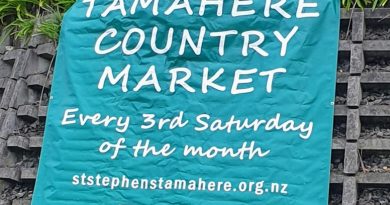