Tamahere-Mangaone Restoration Trust members marked the end of another year of voluntary work recently with a toast to a new environment-preserving feature in the Tamahere Reserve.


Trust volunteers have built an all-weather track that now runs the length of the 4.6ha Tauwhare Rd reserve, including past a stand of majestic kahikatea trees.

The track includes a platform built to allow reserve visitors to walk close to the trees and appreciate the view while protecting the roots of the trees from being trampled.

On hand to mark the latest milestone in the reserve restoration – now in its third year – were trust members Leo Koppens, Russell Gibbs and John Sheat.

Spokesman Leo Koppens was pleased that visitors could now walk the length of the reserve, mostly on sandy tracks suitable for trainer-type shoes, to discover its lowland forest remnants as well as see all the new planting that had been done.
[slide]
Three years ago native trees and plants were clinging on in the neglected and forgotten reserve while steadily being smothered by exotic species.

A series of boardwalks have also been built in the reserve to give the trust volunteers access to often swampy areas that are to be planted or have been replanted and need maintaining.

“The boardwalks are for access for the volunteer workers,” Koppens said. “They’ve been made as safe as possible with netting to provide grip but we’d recommend that visitors stick to the main track.”

Koppens acknowledged that some visitors might take to the boardwalks.

“It’s a public reserve and people are entitled to enter and explore it. We’d just urge anyone that does to take care and make sure that children are well supervised.”

Looking back over the year’s work in the reserve Koppens said the trust was grateful to locals who’d pitched in on a number of projects, and to supporters who had helped fund the trust’s work. The latter included the Waikato District Council, the Waikato Regional Council, Mighty River Power and Acorn ITM Building Centre.

A number of rare, native bats that had at one time roosted in the reserve appeared to have moved on, Koppens said.

Nightly monitoring over months in the latter part of the year had failed to detect any bats and it seemed that, as is their habit, the bats had shifted home, he said.

“We’ll continue monitoring in the New Year and if they have left the reserve it will open the way to extending the area we can plant in native trees.”

Much of the upper slopes of the reserve is planted in poor quality pine trees, including some in which the bats roosted. The bats apparent departure opened the way for many of the pines to be felled and replaced with the native plants that once made up the natural environment locally.

In the near future Koppens said the trust planned to provide a better footpath from the car park at the top of the reserve, along Tauwhare Rd, to the main entrance to the reserve.

Teachers pitch in for reserve 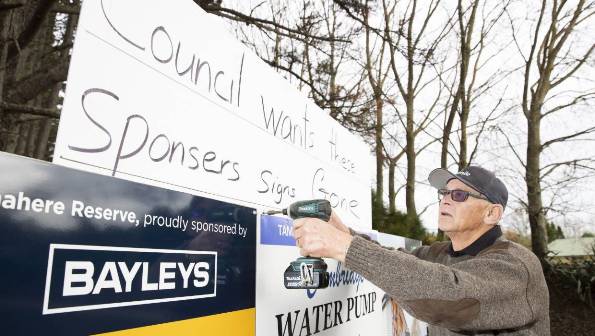