Brothers Sam and Eli Thomas figure if they are going to have a fundraising adventure they might as well make it an epic one.


So, the intrepid pair have hatched a plan to ride two 50cc scooters the length of Vietnam – more than 2500km of third world roads – in the name of prostate cancer.

The former Tamahere School pupils – Sam now 31, Eli, 27 – have named their journey the Dong Project (they haven’t lost their school boy humour) and hope to raise at least $5000 for the Prostate Cancer Foundation.

The Dong Project will be no Sunday jaunt. (The dong is Vietnamese currency as well as being English slang for penis or as the guys coyly put it “that which is effected by prostate cancer”). Their “epic adventure” will be 2500km of pot holes, break downs waiting to happen, mountain passes and monsoon rain on motor bikes with about as much power as a kitchen blender and all in a country where they can’t speak the language.

“We finished school, we studied, and we got jobs but we just wanted a little bit more from life,” said Sam, who lives in Hooker Rd with wife Kristyn, three-year-old son Cooper and their newborn daughter.

“So, we decided it was time we got off our butts, left our offices for a couple of weeks and traveled to the other side of the world, all to raise awareness and money for the Prostate Cancer Foundation by completing an epic adventure.”

The pair chose to try and raise awareness of prostate cancer because, they say, “even with Movember and Blue September it is still the most common form of cancer in men”.

“We felt that any extra money raised now will hopefully improve the situation by the time we and our friends are more at risk. Plus it still doesn’t seem common knowledge that a simple blood test can pick up prostate cancer. We want to help change that.”

The Thomases are paying all their own travel expenses and all funds raised through sponsorship of their trip and various madcap challenges will go to the Prostate Cancer Foundation which is, said Sam, “fully on board and loves the idea” of their journey.

They initially looked at completing a project in New Zealand “but since the costs were comparable we thought it would be more fun in Vietnam, which would hopefully also get more attention and thus be better for fund raising.”

They first visited Vietnam about four years ago, which is when the germ of the fundraising idea occurred to them.

They chose the small, 50CC scooters for the challenge but also because while they are the maximum size bikes tourists are allowed to ride in Vietnam the 50CC Honda Cub is also the country’s most common bike.

“So, all local mechanics should have spare parts on hand,” said Sam who will be relying on his more mechanically-minded younger brother to oversee any repairs.

The adventurous siblings launched their campaign just over a week ago and have been busy spreading the word via their Dong Project website and Facebook page.

They have lined up a number of challenges they are prepared to undertake for sponsorship, including The Fishy Dong Challenge (dunking their feet in a pond of hungry fish in a traditional foot massage), The Smoky Dong Challenge (a burnout challenge in Ho Chi Minh City) and The Jumpy Dong Challenge (eating crickets). They are encouraging followers of their trip to throw up other challenges, which they will share on their Facebook page as they are completed.

The effort, both fundraising and the journey, is a first for the Thomases but they say they will not be easily put off.

“We’re both pretty determined people so once we set our minds to something we generally see it through,” said Sam, who is an architect at Chow:Hill Architects in Hamilton while Eli works at LIC as a user interface designer.

They leave New Zealand on April 25 and expect to be back on May 8, their adventure with all its challenges – expected and unexpected – recorded blow by blow online for those vicariously along for the ride. And with a tidy sum raised for the Prostate Cancer Foundation.

Visit The Dong Project website to support Sam and Eli. Tamahere Forum will also provide the occasional update of their journey. 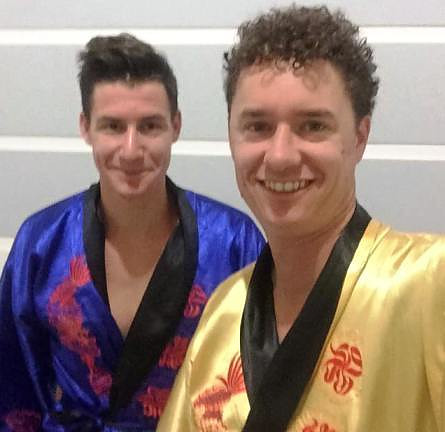