Piles of rubbish have been removed from the Tamahere Reserve thanks to a group of outdoor game enthusiasts who dedicated their Anzac Day to the clean up job.

Reserve restoration trust members have been hauling out bags of rubbish from bottles to tyres since they began work in the Tauwhare Rd reserve over three years ago.


But on-going dumping of household to commercial waste on a near weekly basis continues to add to the unsightly refuse built up over years.

That didn’t go unnoticed by the outdoor gamers or geocachers who use the reserve for their hi-tech game of hide and seek.

Geocaching is a popular, family-friendly, outdoor, hide-and-seek game which uses GPS-enabled devices such as smart phones or a hand-held GPS. Seekers navigate to a place using a set of GPS coordinates and then attempt to find a geocache or container hidden at the location by fellow gamers.

If found, they sign a logbook in the container and write a note on-line at www.geocaching.com. Many containers have small swappable trinkets and with over 2.5 million geocaches worldwide there are plenty to look for.

One of the gamers other activities is Cache in Trash Out (CITO), an environmental initiative supported by the worldwide geocaching community. Geocachers are encouraged to organise and participate in CITO events with a focus on cleaning up litter from parks and reserves. The idea is that each small act makes a difference, improves the area for others, and collectively makes an enormous positive impact.

About 15 geocachers from Hamilton, Rotorua and Auckland responded to the call of local woman Jane Morgan to help clean up the Tamahere Reserve. They were surprised by the big pile of rubbish they collected, she said.

“Most are seasoned volunteers at these sort of events; even so, everyone was surprised at the huge volume and variety of rubbish uncovered in the gully,” Morgan said.

“Such a shame that people continue to dump their rubbish there. Such a beautiful spot and [it was] great to be able to support the trust’s efforts around improving the area.”

Commenting online after the event one geocacher described the haul as “quite shocking”. However, the gamer said, “the household, builders’ and mechanical rubbish created a satisfying pile.”

It was such a big pile that the geocachers, who usually dispose of their rubbish haul themselves had to get help to remove it.

A grateful Tamahere-Mangaone Restoration Trust chairman Leo Koppens weighed in with his trailer to remove the rubbish from the reserve carpark.

“The geocachers have done a great job,” he said. ‘It’s a long way up the hill when you are carrying a heavy load. We’re grateful to them for picking up the rubbish and hauling it out to be finally removed from the reserve.”

Koppens added that it would also be good when people, including business operators, stopped using the reserve as a dump.

“It’s a beautiful place. It’s a pleasure to visit. It’s not a place for the lazy to litter.” 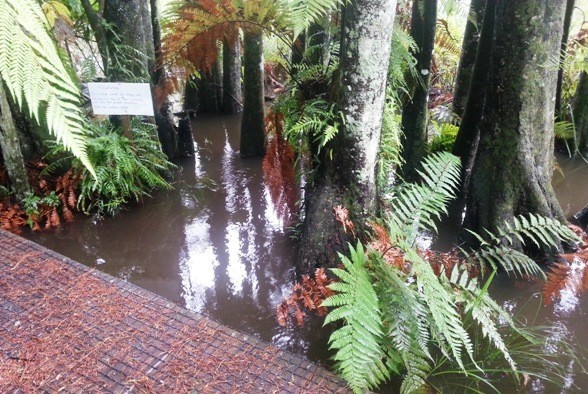