The Tamahere Reserve has reached another milestone – a professionally-written ecological restoration plan to guide its way for at least the next five years.


Prepared by Wildland Consultants and funded by the Waikato Regional Council, the 78-page plan documents the current, partly restored state of the Tauwhare Rd reserve, the issues ahead for its restorers and how they can be managed.

Significantly for a vestige of the type of forest and wetland that used to dominate the Waikato, the plan places the 4.6ha Tamahere Reserve in an ecological history dating back tens of thousands of years.

Following the Taupo eruption of 230AD the braided river channels of the Waikato River eroded through seepages forming terraces and steep-sided gullies such as the Tamahere Reserve gully, the plan says.

“As they developed, the gullies became deeper, eroding their beds with the deepening erosion of the riverbed, and increasingly complex, with many side branches and steep sides.

“The Mangaonua-Mangaone gully network is an example of these extensive systems.”

Fast forward to the present, however, and the plan suggests there “needs to be a fundamental change to the use of the site to reduce inherent conflicts and enable restoration of indigenous habitats within Tamahere Reserve.”

It recommends that for safe use of the site the existing lease to Regal Haulage (for a truck wash) be brought to a close, the Regal Haulage area and waste disposal area be rehabilitated, fly tipped rubbish be removed from the whole site and, long term, the bulk of the pine plantation be removed.

Building on the four years of weed clearing and planting that has already taken place, the plan provides a planting guide of native plant species for the reserves different areas and advises that “frequent post-planting maintenance is critical to the success of this project.”

“Follow-up control of weed species will be required during the five year planting period.”

The advice, “if carefully applied”, will improve ecological values rapidly and are “likely to significantly enhance the restoration outcomes over the next five to 20 years,” the plan concludes.

Reporting on the completion of the restoration plan to this month’s Tamahere Community Committee, Tamahere-Mangaone Restoration Trust spokesman Leo Koppens said it would be a founding document if and when the Waikato District Council formalised a management plan for the reserve.

It would also assist with funding applications, he said adding that funding continues to be “an elusive goal”.

One application that did net some funds recently was to Trust Waikato, which provided a grant of $1600. The funds were used for timber to rebuild 27 metres of boardwalk along a particularly boggy area of the main track.

That particular project was also fortunate to be supported by Stevenson Designer Building, which donated three men for a day to construct the boardwalk. Extra timber was supplied by Arnold Koppens of Woodworks.

More on this topic: Tamahere Reserve

Properties to be tagged 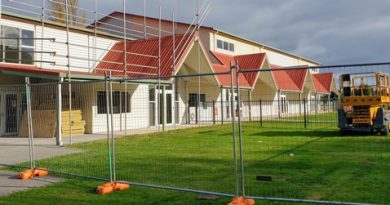 What price the Tamahere Community Centre?

Icepak proposes to rise from ashes