Tamahere’s Jenny Jack has never been more supportive of the World of WearableArt – WOW – show.

This year her entry has been accepted for the Bizarre Bra section.

A casual glance at a bunch of paper clips inspired Jack to make a bra.

Not just any bra but one composed of 17,000 of the coloured clips.

Making the bra out of paper clips was great, because they’re so flexible and she could work on it anywhere, Jack told the Waikato Times.

“Some people knit, I paper clip.”

Right now Jack cannot say much more about her creation as designs are shrouded in secrecy until the show opens in Wellington on September 22, the Waikato Times reported.

Hundreds of hours go into designing and creating each piece, without any assurance it will be shown at the event.

That factors into Jack’s decision on what material to use.

“You don’t want to spend too much money on something when there is no guarantee it is going to even make it into the show.”

In fact the judges selected 133 designs from 261 entries, with Jack being the only one from Hamilton.

Last year her design was an entire suit made out of computer keys. The year before she had two children’s dresses made to interact with each other with balls that swirled around the bright yellow garments.

Jack credits a background in the apparel industry to give her a platform to work from. She thinks it partly explains her success in getting pieces into the costume extravaganza.

She stepped away from working in the clothing arena when she and her husband started their family.

Although Jack is back working part time at Plunket, she wanted to do something she was passionate about and WOW offers a different creative outlet to making standard clothing.

And it is something she can rope her creative sons in to help her out with.

This year they helped sort the paperclips into various colours.

She started going to the show as a girls’ trip to the capital, but since she has been entering designs, the husband has been tagging along, too.

And as the sons get older, they are starting to show an interest in wanting to go, Jack says.

“I know the 10-year-old is chomping to get down as well, so I will probably take him in the next couple of years.

“But just quietly, it’s a nice break away,” Jack says and then chuckles.

“I love my family and they are incredibly supportive, but gosh, it can be hectic.”

There was only one downside Jack could think of for entering the competition.

“I’m still finding random paperclips down the back of the couch.” 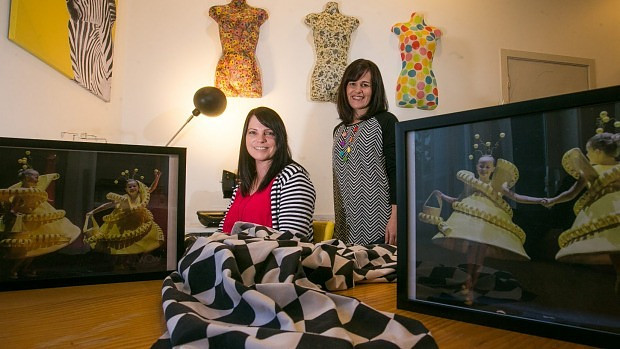