Can a book build a swimming pool?

The inspired and hard working Tamahere women behind the impressive Divine Eats, a cookbook from the heart of Tamahere, are giving it their best shot.

The 432-page, hardback book they have created features 285 recipes, stunning photographs of food but also of so much else local that it makes for a beautifully rendered slice of Tamahere in time.

The task the 13-strong organising team set themselves a year ago was to create a cookbook whose sales would help fund a new swimming pool for Tamahere School.

They would seem to be well on track toward realising their goal. This is a cookbook that should make a big splash.

Anyone buying the book will have in their hands not just tried and true recipes but a record of Tamahere 2016 – its people, it’s lifestyle, its occupations.

The 1992 Tamahere School cookbook that inspired this fundraising edition was a much humbler edition. But perhaps it, too, reflected its times. Looked at together by social historians in the future the two cookbooks may even make for fascinating social commentary.

More immediately, though, Divine Eats will be bought for its family friendly recipes, contributed by locals and the odd celeb. Handy to know that when you try to make that Coq au vin or sesame lavosh that real people turn these things out on a regular basis in a regular kitchen for regular people.

Project director Angie Millar told the Waikato Times she was “pushing for perfection”.

Photographer Jodi Bennett added that “everything’s been done on a volunteer basis but to a really professional level.”

More on this topic: Cookin’ with Tamahere 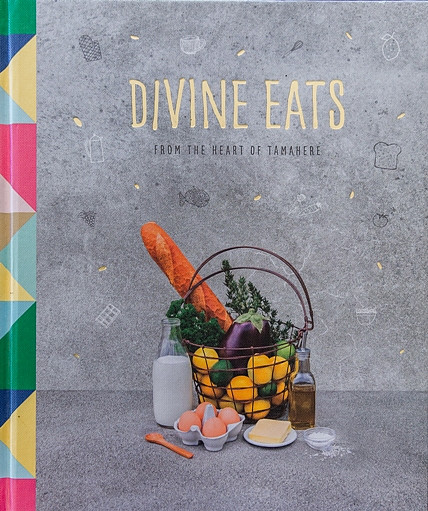