As a bonus the meeting, chaired by Tamahere Community Committee chairman Dallas Fisher, also heard from candidates for the Waikato District health Board and Waikato Regional Council.

As far as tub thumping political meetings go this was a tame affair. There was tension, particularly between incumbent mayor Allan Sanson, who is seeking re-election, and two of his rivals – outgoing Tamahere ward councillor Wally Hayes and Brian Cathro, a Waikato District Council employee.

Hayes and Sanson have clashed publicly. Cathro largely laid the blame for a lack of cohesion around the council table and poor understanding of community needs at the mayor’s door.

For his part, Sanson defended his record, laid out his achievements, particularly attracting big business to the district, and said it wouldn’t have been possible “without the majority being in the waka”.

The odd sling and arrow aside, the 3-hour meeting was mostly highly informative. The candidate’s around seven minute presentations were generally concise and to the point, the questions from the floor inventive and searching, responses revealing.

A pity then that more people didn’t take the opportunity to attend, particularly when a top reason people don’t vote is insufficient knowledge of the candidates.

First up for the Tamahere ward, Aksel Jepsen, who was out of the blocks early with his candidacy announcement, stuck to the message already finessed in his campaign material and on his website.

Donna Nichols, who is standing for both the Tamahere ward and the mayoralty, added a snippet of personal information – she’s a keen ballroom dancer – to the rundown of career experience, including being a former Waikato District Council staff member, that she said fitted her for both jobs.

Both fielded questions on the possibility that a chunk of Tamahere would be carved out of the district and added to Hamilton city – the boundary line drawn by the long coming Southern Links ring road sweeping from Hamilton’s southwest across the Waikato River to State Highway 1 at Tamahere.

“I think it’s coming and it might come quicker than we think,” Jepsen said. “We need to get the best deal on the way in.”

Nichols: “I’ve never been a fan of giving district land to Hamilton. It doesn’t have to happen. Giving over a valuable area around the city is an economic gain for Hamilton and a loss to the Waikato district.”

Both are keen for the council to fund more amenities in Tamahere, particularly to enable the full development of the central sports and recreation area.

“We need the funds to finish it, and we need public toilets there soon,” Jepsen said.

Meanwhile, Nichols warned that landowners would soon need protection from property developers as a result of the proposed National Policy Statement on Urban Development Capacity.

The policy could reduce constraints on developers in high growth areas and enable them to work outside council rules, she said.

“We need to get in front of that legislation, understand what the issues are and what the community wants. Anything like that needs to be batted back.” 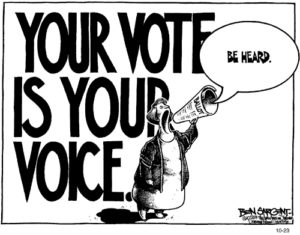 A clever question from the floor had the mayoral candidates leaping past their immediate plans to instead contemplate the council and district as though three years had sped by and they were looking back at their achievements.

Hayes: The community will be closer to the council and they will be working together to achieve more. We will be growing our community. The environment at council will be happier.

Cathro: A united team of councillors will be governing in a fair way that gives communities confidence. The public will have a real sense of transparency and fairness in council spending. Every community and town will feel they have a voice that is being heard.

Nichols: The key will be better value business in the district which will drive higher rates of employment and income for people. The rating basis will be spread in a much better way. Communities will have a real voice.

Sanson: There will be a fruition of the economic development that has been underway. In Huntly and other communities that have social issues people will have a better life. The Waikato Expressway and Future Proof will be completed.

John Deacon: The rating system will be sorted out. The council will be more interested in towns that are tired, family life that is dysfunctional and pensioners who are struggling. Community boards will have more control.

Candidates standing for two other bodies took the opportunity of the meeting to get before voters.

Tamahere woman Crystal Beavis is standing for re-election to the Waikato District Health Board. Her website is here.

She will champion a healthy environment, economic development and protection of special places.

The full list and details of all candidates in the WRC Waikato electorate can be seen here.