The impact of work on the Waikato Expressway at Tamahere is set to bite further on drivers, especially during heavy commuter traffic on State Highway 1/Cambridge Rd.

From next Monday, March 27, northbound traffic heading into Hamilton on SH1 will be merged into one lane at the Tamahere interchange.


Speed restrictions will also begin at the interchange – the SH1 intersection with Airport and Tauwhare roads – to allow safe traffic flow.

The planted median between the Tamahere interchange and the Bollard Road intersection will be removed, rebuilt, sealed and have barriers installed, NZTA said in a expressway update.

Some initial changes to the traffic layout between the Tamahere interchange and the Bollard Road intersection will also begin this week.

At the beginning of May, traffic will be moved over to the eastern side of SH1 so construction can start for the northbound on-ramp that will take road users into Hamilton.

The shift of traffic will give the construction team more space to work without interrupting traffic flows.

The on-ramp is part of what will be something of a spaghetti junction which will eventually include an east/west bridge connecting Cherry Lane and Bollard Road with Cambridge Road and Birchwood Lane.

This section of the 22km expressway, known as the Hamilton section, is due to be completed in 2020.

More information can be found on the NZTA website, by following the updates on the Waikato Expressway Facebook page, or by visiting the visitor centre at Percival Rd, off Ruakura Rd. Opening hours are 10am-4pm, Monday to Friday.

A open day will be held on Saturday, April 1, from 10am to 3pm at the visitor centre, 164 Percival Road, Hamilton.

It will include opportunities to question members of the construction team, walk through one of the bridge construction sites, check out the big machines – diggers, dumpers and pavers, view a big project floor map, and watch a flyover video. 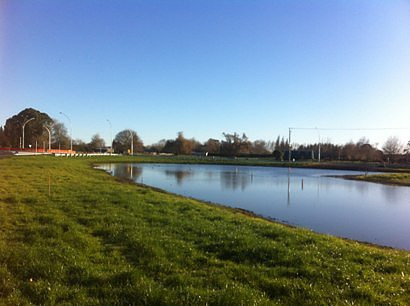