Tamahere author Nicky Webber has made a strong plea for tolerance in her first book No Ordinary Man. 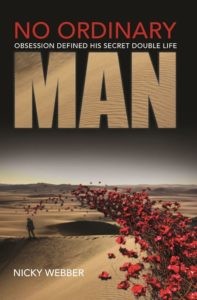 Webber, a former journalist, tells the story of Mick Thompson, a young, World War II soldier who is forced by the times and intolerance to hide his true nature.

A brave soldier who fought in Egypt, Tunisia, Syria and Italy and gained the rank of sargeant, Thompson was also a cross dresser.

A chance conversation led Webber to the story and a meeting with Thompson’s niece. In a few weeks she had old documents, photos, news clippings and his tattered diary.

“It took two years of historical research and many discussions with his niece to pull the story together,” says Webber.

“Apart from getting the facts straight there was the dramatisation of Mick’s life as seen through his eyes, building the character and his relationships. It was tough going living in the head of a 20 year old ANZAC soldier in the Western Desert war!”

As New Zealand marks another ANZAC day this week, Webber’s account, published on Amazon in January this year, graphically describes the harsh life of the soldiers, veering from intense boredom to ear splitting, nerve shredding terror.

Who could judge anyone for seeking what comfort they could find anywhere they could find it? But, of course, conservative, 1940s New Zealand allowed a very limited range of expression no matter how harmless and privately expressed. As did the decades that followed.

Returning home, Thompson found work as a cabinetmaker and, briefly, love. But cross dressing, his method for briefly escaping the horrifying memories of war and his earlier childhood humiliations, had to remain a secret, blighting his life.

Perhaps today, Thompson’s lifestyle choice may have been more acceptable … in some places and at some times. But as recent terror events here and overseas show us these are are also times of growing intolerance of people’s lifestyle choices.

In that context No Ordinary Man is a book that makes an eloquent case for a much broader view of what it takes to be human and how a little kindness can go a long way.

Nicky Webber, who lives in Tamahere, was born in New Zealand and lived in South Africa during the turbulent 1980s. She had a career as a newspaper and magazine journalist before returning home to Auckland in 1994.


She took a two-year sabbatical from her job to research and write No Ordinary Man, her first book.

She is now writing, In the Deep End, a work of fiction, which explores the taboo subject of polyandry. This narrative delves into the complexities of marriage and navigates the love bonds between two married couples. It will be released in mid-2019.

The Kindle/eBook and paperback versions of No Ordinary Man are available on Amazon-worldwide.

One thought on “Book makes case for tolerance”