Tamahere’s central playground and skatepark shone under blue skies and bright sunshine as it was officially opened today.


In a ceremony led by Ngati Haua kaumatua Sonny Karena the park on Wiremu Tamihana Dr was blessed, ribbons were cut and then the area circumnavigated by a happy crowd of children, adults and community leaders.

The group then gathered in front of an assembly of Tamahere School students whose kapa haka roopu impressed with the first public performance of its own school haka.


MC and Tamahere ward councillor Aksel Bech paid tribute to his predecessors, Wally Pollock and Wally Hayes, for their foundational work over more than a decade in helping create the central hub and park.

Tamahere Community Committee chairman Dallas Fisher credited local resident Derek Fairweather for promoting the idea of an area where the community could have a sense of place, gather and have fun.

And the community had supported the project by agreeing to a targeted rate to fund it “which doesn’t happen everywhere,” he said.


Waikato Mayor Allan Sanson also noted the early input of the late Cr Wally Pollock before cutting a cake, which featured a photo of the playground, and was then shared with the crowd.

In the warm sun skaters showed their skills and small children from Montessori School, and the Pentagon and Lil Pumpkin daycare centres played on the play equipment. 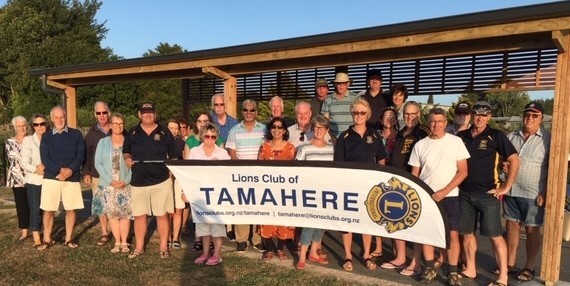