More than a hundred people turned out for the biggest public meeting in living memory to express their disgust and frustration at the sacrifice expected of the community for the sake of the big State Highway 1 roading project.

Tamahere School principal Waveney Parker said it was impossible for school children to safely walk a few hundred metres to the Tamahere Reserve or St Stephen’s Church. Both places offered educational and enjoyable outings but were “way too dangerous” to access.

“Logistically we’re stuck on this bit of land,” she said of the school’s site on the central precinct bounded by Airport Rd, Devine Rd and Wiremu Tamehana Dr.

“It would be a godsend to have connectivity [to other parts of Tamahere] for our children.”

Tamahere Friday Cycle group member Mark Blackwell said up to 50 people were part of the group whose aim was to bike local roads.

“Our philosophy is we shouldn’t have to get into a car to go cycling,” he said of the group that sets off weekly from the Tamahere Community Centre car park.

But the local infrastructure was “not fit for purpose for pedestrians, cyclists, mobility scooters and the like,” he said.

His view was echoed by Jane Manson, organiser of the Tamahere Market and St Stephen’s church member.

She wanted connectivity that “keeps people away from cars”.

“We’d like people from Woodcock Rd to be able to walk to the market,” she said but Tamahere was a community “split in two”.

Year 9 Hamilton Boys High School student Thomas got a round of applause for his passionate plea to be able to bike to school, a goal rejected by this parents because of safety concerns.

Thomas made an eloquent case for the health and community benefits of locals being able to walk and cycle around their community.

There were also strong calls for the 100km/hr speed limit to be reduced on Airport Rd/SH 21 between Tamahere Dr and the Narrows Bridge, and for more paths and safe pedestrian crossings between Newell Rd and Tamahere School.


Fisher said he was disgusted that no NZ Transport Agency representative attended the meeting despite being invited by email and in person.

Among NZTA’s key urban delivery undertakings was supporting community cohesion but, he said, the agency was “fundamentally not delivering.”

Fisher reiterated that his committee believed that NZTA had been stringing it along for at least a decade with promises of pedestrian and cycle ways, a process that started when a committee meeting was shown a digital image of a footbridge across SH1 10 years ago.

“We trusted NZTA to deliver for our community. In hindsight that was a mistake and I now question the motives of NZTA in showing us that,” he said.

Since then there had been considerable growth in the community and more was to come with the expansion of aged care facilities at the Tamahere Eventide and new Sanderson retirement village. As well, the completion of the section of the Te Awa cycleway through Tamahere would mean at least 3000 cyclists a week biking between Hamilton and Cambridge.

NZTA had latterly mooted an underpass across Airport Rd but a SH1 crossing was “not on the agenda and not in the budget,” Fisher said.

“There are no plans for an east-west [SH1] crossing,” he said.

Labour list MP Jamie Strange said a postponed meeting with Associate Transport Minister Julie Anne Genter on the matter would be re-scheduled and he would also report to Transport Minister Phil Twyford to “put the spotlight on this issue.”

Mayor Allan Sanson promised to work on behalf of the community in talks with NZTA.

The meeting unanimously resolved to support the Tamahere Community Committee on four fronts: 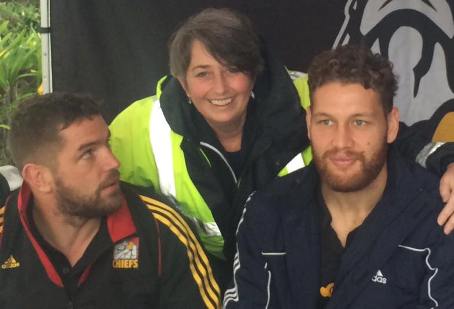 One thought on “Locals angry at losing to cars”