Associate Transport Minister Julie Anne Genter has given her backing for safer footpaths and cycleways for Tamahere.


In Tamahere today, Genter said she had let the NZ Transport Agency know of her expectations for safe connectivity for Tamahere, which is bisected by the State Highway 1 Waikato Expressway.

A lack of safe walking and biking routes has become a hot button issue for Tamahere people who turned out in unprecedented numbers to a recent public meeting on the issue.

The Associate Transport Minister, a renowned biking proponent, was in Tamahere to mark the beginning of work on a section of the Te Awa River Ride which will pass through Tamahere.

A re-think was needed on infrastructure because everyone should have the right to get around without feeling threatened by traffic, Genter said.

She acknowledged that as far as the Te Awa cycleway was concerned not all connections had been found for Tamahere but solutions were being worked on.

She also said that because the Waikato Expressway divided Tamahere a rethink was needed to enable people to safely access schools and shops.

NZTA had not budgeted for local connectivity for Tamahere, which was proving a problem but she had let the agency know of her expectations on the issue, Genter told Tamahere Forum.

Meanwhile, construction of the final section of the Te Awa cycleway will begin in Hamilton tomorrow.


The middle section of the 70km river ride will go from the Hamilton Gardens across the Hillcrest gully system, through Tamahere and connect with the already completed Cambridge path.

The Hamilton path will be predominantly off-road and will follow the banks of the Waikato River in places. It will also include bridges over stream gullies and boardwalks.

NZTA is contributing $7.9 million to the $20 million Hamilton section of the project.

Genter along with Te Awa chairman Simon Perry turned the first sod at Tamahere this morning.

Perry expects the completed cycleway to generate tourism benefits for the Waikato. 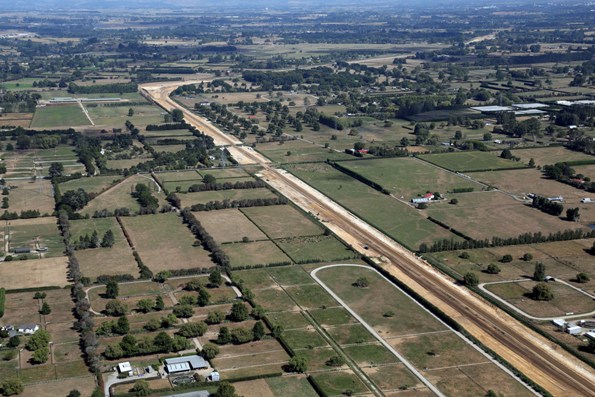