The family of a young Tamahere man, seriously injured in a recent hit and run incident, are appealing for help in solving the crime.

On Tuesday, March 24, pedestrian Dion McFetridge , 21, was hit on Tamahere Drive by a speeding car and was left lying badly injured in the centre of the road.

There are several witnesses to the incident and a description of the vehicle but not its licence plate number.

“With the lockdown police are focused on other things and we sit here frustrated that someone can leave another human being injured on the road and get away with it,” said Karin McFetridge, Dion’s mother.

She asks that people in the area check for any camera surveillance footage that might show the vehicle, a white or silver, Volkswagen Touareg, that might show its number plate. It is likely to have a missing passenger-side mirror.

Dion was hit at 4.49 pm, Tuesday, March 24 outside his home, 63 Tamahere Drive. The vehicle came from Airport Road, possibly driving from the airport – Mystery Creek area or Newell Road.

“Any footage prior to the incident from the airport – Newell Road area or after the incident toward Pickering, Pencarrow and Hooker roads could show the vehicle,” McFetridge said.

She asks that people pass any evidence to Hamilton police using the event number P041448141.

Dion’s injuries required six hours of surgery to his right arm, which replaced much of his bone with metal plates and screws. He had grazes to both arms and legs and suffered a small fracture to his spine.  He was in hospital for four days and is now recovering at home.

Tamahere Drive currently has signs requiring traffic to slow “but traffic generally speeds in this area,” said McFetridge who has lived in the area for four years.

“We have been concerned about the quantity of gravel deposits [outside their house] from time to time as it does block visibility getting out of our drive way and we have had a near miss in our car once trying to get out.

“People are going far too fast,” she said. 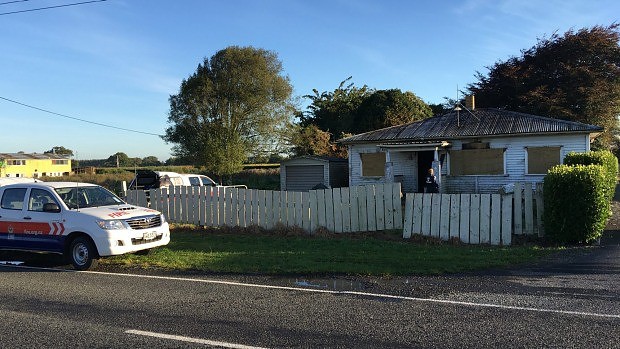