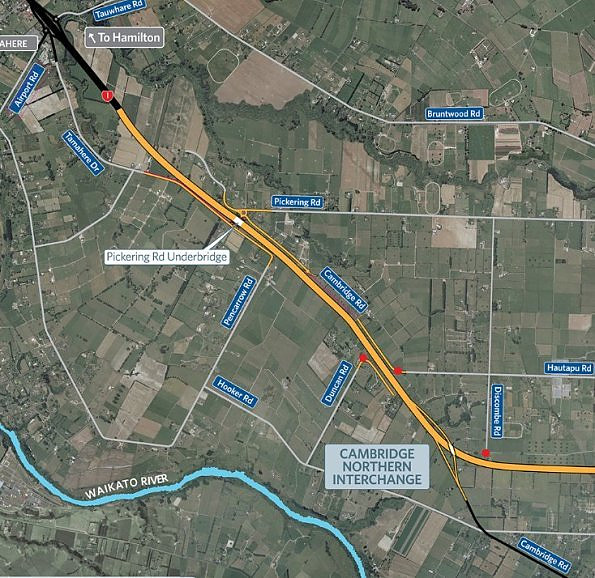 UPDATE: Access from Duncan Rd to State Highway 1 will close permanently from Wednesday, May 6 – brought forward from Thursday.

At the same time, SH1 traffic will be switched onto the new expressway between Duncan Road and just south of the Cambridge Northern expressway interchange. (Not over Thursday/Friday as notified earlier.)

The NZ Transport Agency and HEB Construction recommends that in future Duncan Road residents use Pencarrow Road and the existing Tamahere Interchange to access SH1.

Pencarrow Rd is set to re-open on April 20, allowing local traffic to access State Highway 1 at the Tamahere intersection.

Along with Pencarrow Rd’s re-opening a new cycleway/footpath will also be completed and open along Tamahere Drive, said the NZ Transport Agency and HEB Construction.

And landscape planting has begun, starting at Pickering Road and moving southwards as the new expressway work progresses.

Tamahere Drive will re-open from tomorrow under stop/go traffic management, providing local traffic with direct access from Pickering Road to SH1 via the Tamahere Interchange.

Following the re-opening of Tamahere Drive the section of road between Pickering and Pencarrow roads will be closed for reconstruction.

It’s thought Pickering to Pencarrow Road will be closed for about five weeks, advise the NZ Transport Agency and HEB Construction.

The local portion of the Waikato Expressway is expected to reach a major milestone this week with the switch of State Highway 1 traffic on to the newly completed Pickering Road bridge.

The switchover is expected to take place around 5.30am on Friday, March 6.

As a result there will no longer be access from SH1 to and from Pickering and Pencarrow Roads for local traffic.

A resident of an historic Pencarrow Rd, Tamahere homestead, tells its story …

Early in 1866, John Martyn Jnr and William Lyn Martyn, recently arrived from Cornwall, purchased 2000 acres (809ha) of land from Capt William Steele, John Crawford, and Capt. Davis, who had purchased the land in the preceding year.

The Martyns’ 2000 acres was bounded by the Waikato River to the West, and what are now Airport Rd/SH1, and the southern leg of Pencarrow Road. The Martyns called their farm Pencarrow.