Riverside Golf Club is preparing to farewell play on its Lochiel course for at least two years after striking a deal with NZTA for its Narrows Course as part of the Southern Links roading project.

The club, whose 800 plus members will play on the Narrows while Lochiel is redeveloped, has negotiated a multi-million dollar deal with NZTA for the Narrows, which has a highway designation running through it.

The settlement is understood to be enough to totally redevelop Lochiel.

END_OF_DOCUMENT_TOKEN_TO_BE_REPLACED

Riverside Golf Club members are to discuss a proposal to sell one of the club’s two courses to make way for the Southern Links roading project.

The Tamahere club has two golf courses – Narrows and Lochiel. The plan is for the Narrows course to be sold and to redevelop the 18-hole Lochiel course and clubhouse facilities.

Club president Craig Meinsmith​ said the club has been in discussions with the New Zealand Transport Agency for some time over the future of the Narrows course, which has a highway designation running through it.

END_OF_DOCUMENT_TOKEN_TO_BE_REPLACED 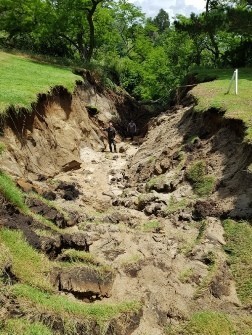 END_OF_DOCUMENT_TOKEN_TO_BE_REPLACED

The future of Tamahere’s Riverside Golf Club – eventually to be divided by the Southern Links ring road south of Hamilton – could be decided as soon as mid-year.

The NZ Transport Agency has accepted the club’s need to speed up decisions about its future after the designated route was identified three years ago but the road’s construction was not expected to begin for around 15 years or more.

“NZTA has accepted the club’s need to expedite the process,” said club president Craig Meinsmith in a letter to members.

END_OF_DOCUMENT_TOKEN_TO_BE_REPLACED

A spectacular fly-over video of Tamahere’s Narrows Golf Course enables it to be seen as never before.

The short film by videographers Nick Hanna and Yann Roghi of Twiply Studio provides a soaring, bird’s eye view of the Riverside Golf Club’s beautiful course beside the Waikato River.

See below for the breathtaking views which suggest that if golf is not just a good walk spoiled then golfers are very lucky indeed to have crafted beautiful spots in which to play their game.

Waikato’s newest golf club – the result of a merger between the Lochiel and Narrows clubs – will take its name from the Waikato River, which flows between its two courses.

To be known as the Riverside Golf Club, the name arose from a vote by members of the two clubs.

The origins of the new-look club lie nearly 80 years in the past. Lochiel was formed and incorporated in 1938 and Narrows in 1935.